This guide is for installing and using the Homebrew Channel on your Wii. There are many other guides out there, but I assure you my guide is all you need to run homebrew.

Certain sites are selling guides or "Wii Homebrew Unlocks" and bundle software with them. These sites typically claim to offer many features for your Wii, while in reality they just provide a collection of freely available software and information, often illegally. These sites are SCAMS; you never have to pay for this information. See also: HackMii Blog post 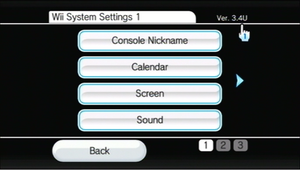 In order to install the Homebrew Channel you need to run an exploit. See "Exploits" below.

Note: If you do not know your System Menu version, go to Wii Options, then System Settings and in the upper-righthand corner it will show your version. (The letter stands for your region; U=USA [North America], E=Eur/Aus [PAL regions], J=Japan, K=Korea)

Note: You can use any game exploit listed above to install the Homebrew Channel on a Wii U in Wii mode.

This page on current Wii exploits may be easier to follow than the above section.

Install from an existing Homebrew Channel

Install from an existing BootMii

Since you are using my guide, please help me out by clicking here!

You can also donate to me using PayPal: